Following a successful fundraising campaign, the contribution of Burbage resident Sharrad Gilbert has been recognised with an appropriate memorial to commemorate his life and the decorated War hero. 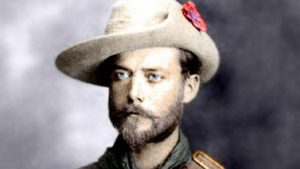 In Burbage St. Catherine’s Churchyard, in a previously unmarked grave, rest the mortal remains of one Sharrad Holland Gilbert. At the time of his death, in 1961, he was the oldest resident in Burbage, a widower of some 21 years, he was aged 93 and was blind and deaf. He died at his home De Montfort House, in Britannia Road. Mr Gilbert had fallen onto his fire and died of severe burns. These bare facts, passed over with little comment in the local press belie the importance of Sharrad Gilbert’s contribution to his community and his country.

Sharrad Gilbert had the distinction of serving in elements of the Leicestershire Regiment for 35 years, encompassing both The Boer War and the First World War. He was a writer of distinction – “Rhodesia and After” his book on his exploits in the Imperial Yeomanry during the Boer War is considered a masterpiece of its genre and was republished in 2004.

The Hinckley Times and Bosworth Herald eagerly reproduced material sent back from South Africa by Gilbert. He worked for the local hosiery industry all his life as an office clerk and was a leading member of the local Conservative Association, editing the group’s newsletter in the 1890’s. His name appears on the Boer War memorial tablet that is currently owned by Hinckley and Bosworth Borough Council and which was on the wall of the old council offices in Station Road, Hinckley for many years.

As Joseph Barsby, Director of G. Seller & Co. Ltd explains, “We were delighted to support the campaign for ‘Sharrad’s Stone’ to create a fitting memorial to reflect the contribution that Sharrad Gilbert made and to celebrate the life of the man from Burbage.  Following a successful fundraising campaign the memorial was completed and it was great to see the official launch take place and a fitting service of reflection too.  Sharrad’s Stone is a memorial that means Sharrad is no longer remembered as the forgotten hero and we have created an appropriate memorial to remember his endeavours on behalf of the country.” 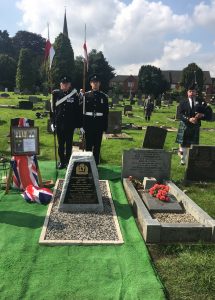 As Joseph concludes, “It was great to reflect on the incredible life of an extraordinary man who made such a remarkable contribution. The Sharrad tone is a fitting memorial to the endeavours of Sharrad Gilbert  and it was  a pleasure to be involved in such a project to create such an appropriate and fitting memorial too.”